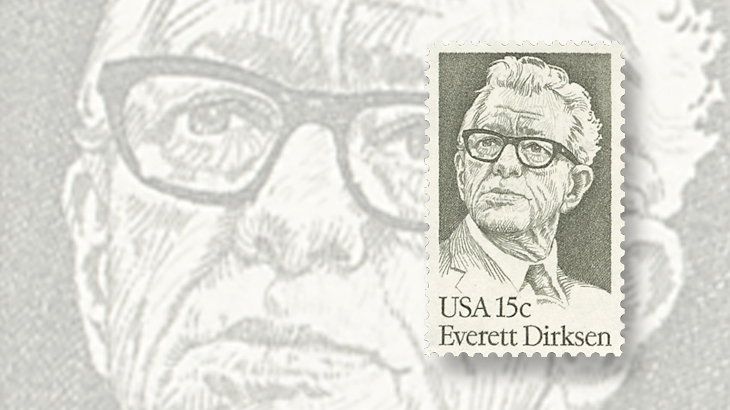 A 15¢ stamp honoring longtime Republican Congressman and Senator Everett Dirksen was issued in 1981.

Dirksen studied at the University of Minnesota College of Law at Minneapolis and later worked in a series of different jobs and businesses. In 1927 he was elected to the Pekin city council, and five years later he was elected to his first of eight consecutive terms as a Congressman representing the state’s 16th district.

He unsuccessfully sought the Republican presidential nomination in 1944, and in 1948 he decided against seeking re-election.

Instead, he ran for the Senate the following year, serving until his death in 1969. Dirksen was known for his powerful orations, his sly humor and his outspoken larger-than-life manner, and he became a popular figure often interviewed on television news programs. He was the minority leader in the Senate from 1959 to 1969, fought for passage of the Civil Rights Act of 1964, and supported President Lyndon Johnson’s escalation of the Vietnam War.

In 1967, Dirksen recorded a spoken word album, Gallant Men, for which he won a Grammy Award the following year.