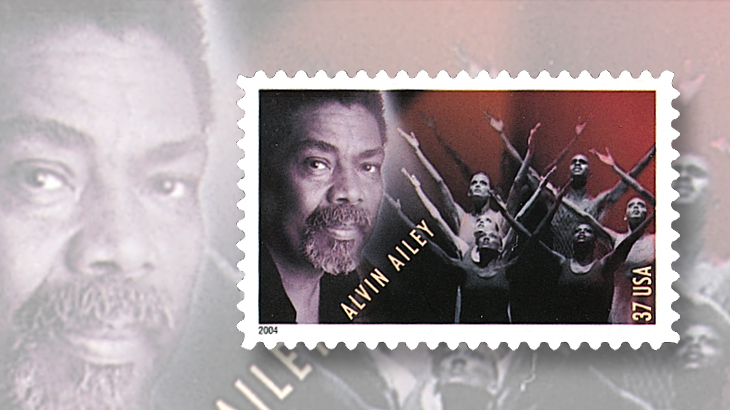 The 37¢ stamp honoring Alvin Ailey was issued May 4, 2004, in the American Choreographers set.

Dancer and choreographer Alvin Ailey was born Jan. 5, 1931, in Rogers, Texas. He grew up immersed in the music and traditions of the black church, elements he would later incorporate into his choreography.

Ailey and his mother moved to Los Angeles when Ailey was 12. After finishing high school, Ailey began to study dance with Lester Horton. When Horton died in 1953, Ailey became director of the dance studio and began choreographing works professionally.

He formed his Alvin Ailey American Dance Theater, based in New York, in 1958, and quickly found success with early works including Blues Suite and Revelations. He created 79 ballets over 30 years, and his dance company toured the world to great acclaim. Its success continues today under the leadership of artistic director Robert Battle.

Ailey was a 1988 recipient of the Kennedy Center Honors. He died in 1989, and was posthumously awarded the Presidential Medal of Freedom by President Barack Obama in 2014.

In its announcement of the award, the White House said, “Ailey’s work was groundbreaking in its exploration of the African American experience and the enrichment of the modern dance tradition, including his beloved American masterpiece Revelations.”