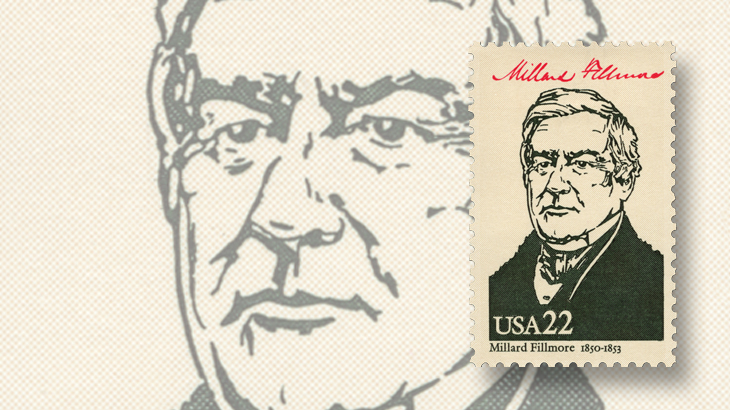 The 22¢ Millard Fillmore commemorative stamp from the 1986 Ameripex Presidential set.

The 13th president of the United States, Millard Fillmore, was born into poverty on Jan. 7, 1800, in a town now known as Summerhill, in upstate New York. His family moved to a farm in nearby Niles, and Fillmore worked there until he was 15.

He was apprenticed at a young age, but became a voracious reader and found employment as a teacher. Deciding he needed additional education himself, he returned to school at age 19, in the class of teacher Abagail Powers, who was just two years older than he.

After studying law with Judge Walter Wood, Fillmore passed the bar and began his own legal practice. In 1828, he was elected to the New York state assembly. After joining the Whig party, he won election to the U.S. House of Representatives, and after leaving Congress, he became New York State Comptroller in 1848.

The following year he was chosen as the Whig party candidate for vice president, on the ticket with Zachary Taylor.

When President Taylor took ill and died after little more than a year in office, Fillmore became president on July 9, 1850, as the nation struggled with the question of slavery and its role in the expanding nation.

Fillmore eventually supported the Compromise of 1850 which, at least temporarily, calmed some of the discontent. However, it included enforcement of the Fugitive Slave Act, angering many in his own Whig Party.

During his presidency, Fillmore also sent Commodore Matthew C. Perry to Japan on a successful mission to establish relations between the two countries.

In the election of 1852, Fillmore was not nominated as the Whig Party candidate for president. His wife died the following year, but Fillmore would remarry in 1858.

During the Civil War, Fillmore supported the Union, but was a critic of President Abraham Lincoln’s policies. After suffering a stroke, Fillmore died in 1874.