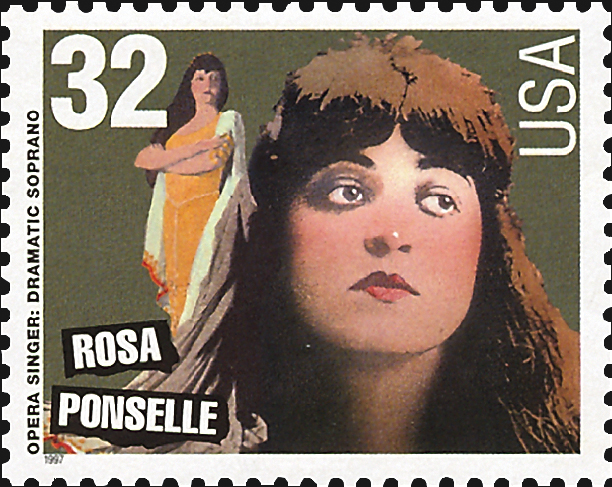 Rosa Ponselle, born Jan. 22, 1897, was honored on a 32¢ United States commemorative stamp in 1997, as part of the Opera Singers set in the American Music series.Soprano Rosa Ponselle was born Jan. 22, 1897, in Meriden, Conn. She made her 1918 debut with the Metropolitan Opera Company opposite the great Enrico Caruso in Giuseppe Verdi’s La Forza del Destino.

Her powerful voice brought her acclaim as the first American-born opera star.

Many years later she was asked by a New York Times interviewer, “How was it that you were given a Verdi premiere as your debut role, when you had never even been on an opera stage before, let alone the stage of the Metropolitan?”

Ponselle, a former vaudeville singer, replied, “Well, I guess the title of the opera says it all: La Forza del Destino, the force of destiny. That was my destiny, apparently, to sing Verdi with Caruso at the Metropolitan. I don’t know how to explain it any other way.”