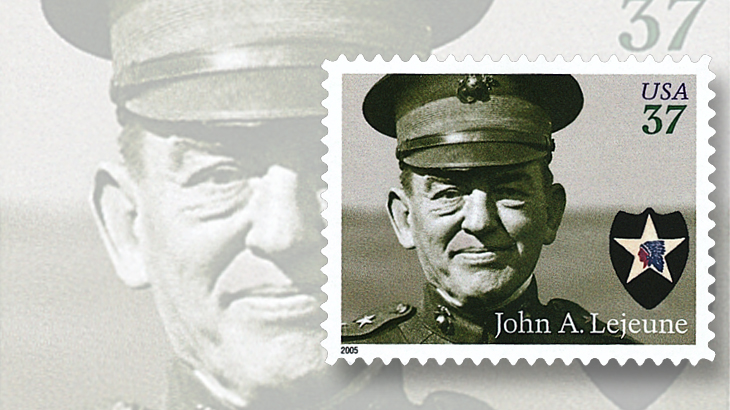 Lt. Gen. John A. Lejeune is pictured with the Second Infantry Division insignia on a 37¢ stamp issued in 2005.

John Archer Lejeune, an American military leader during World War I, was born 150 years ago in Pointe Coupee, La., on Jan. 10, 1867. After graduating with a bachelor’s degree from Louisiana State University, he entered the U.S. Naval Academy, where he was commissioned as a second lieutenant in the Marine Corps.

Lejeune led the Marine Guard aboard the USS Cincinnati during the Spanish-American War. After serving in Panama, Cuba, and Mexico, Lejeune returned to the United States prior to shipping overseas to France in 1918 during World War I, where he commanded multiple Marine brigades, and soon after, led the Army’s famed Second Infantry Division.

After the war, Lejeune was appointed Major General Commandant of the Marine Corps. He retired in 1929 to serve as superintendent of the Virginia Military Institute, a position he held until October 1937.