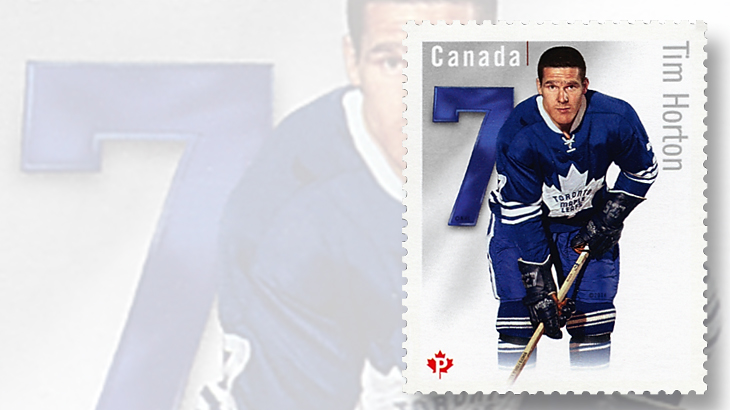 National Hockey League star and restaurant entrepreneur Tim Horton has been honored on Canadian stamps in 2002 and 2014.

Tim Horton was a great success in two very different fields: as a powerful defenseman who played 24 seasons in the National Hockey League, and as a businessman who established a chain of popular restaurants that bear his name today.

Miles Gilbert Horton was born Jan. 12, 1930, in Cochrane, a small town in northeastern Ontario, Canada. Though named for his two grandfathers, Horton’s family called him “Tim” since childhood.

He played ice hockey as a youngster, and in 1949 he signed with the Toronto Maple Leafs of the NHL. For his first three seasons he played mostly with the Pittsburgh Hornets farm club, joining the Leafs fulltime in the 1952-53 season.

He stayed with the Leafs until 1970, winning four Stanley Cup championships with the team along the way. In his final seasons, he played for the New York Rangers, the Pittsburgh Penguins, and the Buffalo Sabres.

Horton scored 115 goals and made 403 assists in a professional career that spanned 25 seasons.

In 1964, Horton opened a successful donut shop in Hamilton, Ontario, and began expanding with franchise partner Ron Joyce. The Tim Hortons chain now has restaurants throughout Canada, with hundreds of additional locations in the United States and other countries.

Horton died in a 1974 car crash while driving home from a game in Toronto. He was inducted into the Hockey Hall of Fame in 1977.