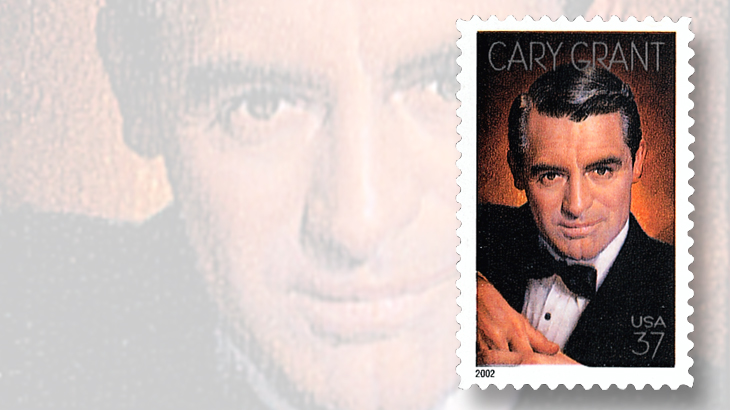 Cary Grant was honored on a 37¢ Legends of Hollywood commemorative in 2002.

Film star Cary Grant was born Archibald Alexander Leach on Jan. 18, 1904, in Horfield, Bristol, England. As a youngster he became involved in the theater, leaving his troubled childhood behind at age 13 to join a traveling acrobatics and dance troupe.

When the group performed in the United States in 1920, Grant decided to stay, joining the vaudeville circuit. By 1922 he was on Broadway, and 10 years later he made his film debut in the Paramount Pictures feature This is the Night. It was one of eight films from 1932 to feature Grant, including his starring role in Madame Butterfly.

Grant became one of Hollywood’s most respected leading men, teaming up with prominent actresses, including Katharine Hepburn in Bringing Up Baby (1938), Holiday (1939), and The Philadelphia Story (1940). He was often featured in light romantic comedies that showcased his sophisticated charm, but he was also a favorite of director Alfred Hitchcock, who cast him in Suspicion (1941) with Joan Fontaine, Notorious (1946) with Ingrid Bergman, To Catch a Thief (1955) with Grace Kelly, and the spy thriller North by Northwest (1959) with Eva Marie Saint.

Presenting Grant with an honorary Oscar in 1970, Frank Sinatra said, “No one has been more admired and loved by his fellow actors, for skill, for finesse, for subtlety, charm, and for being Cary Grant.”