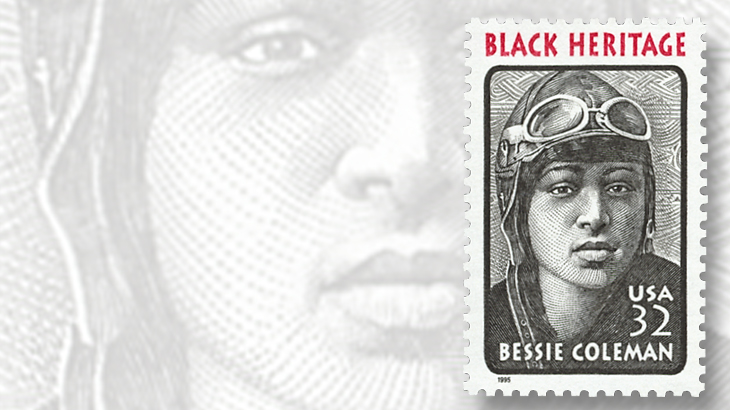 Bessie Coleman, a pioneer airplane pilot, was honored on a 32¢ stamp in 1995.

A fascination with stories of flight was the spark that led Bessie Coleman to become the first black woman to pilot an airplane.

Coleman was born Jan. 26, 1892, in Atlanta, Texas, the daughter of black sharecropper George Coleman, who was part Cherokee, and his African-American wife, Susan. Bessie’s father left the family in 1901, and she moved to Chicago in 1915 to live with her brother. There she found work as a manicurist and pursued her dream of becoming a pilot.

Refused admittance to flight schools in the United States because of her race and her gender, Coleman traveled to France and studied there, earning her license from the Federation Aeronautique Internationale in 1921.

Following additional training in France, Coleman became one of the top aerial performers in the United States, thrilling crowds with her aerobatic skills. But she also wanted to be an inspiration to others, and hoped to save enough money to establish an aviation school that would be open to black men and women who wanted to become pilots.

An advocate for civil rights, Coleman required that her shows be open to everyone regardless of race.

Sadly, Coleman died at age 30 in 1926 when an airplane malfunction caused her to fall to her death while flying during a rehearsal in Florida.

Bessie Coleman was honored on a 32¢ stamp in the Black Heritage commemorative series. Designed by Chris Calle and engraved by Thomas Hipschen and Richard Everett, the stamp was issued April 27, 1995, in Chicago (Scott 2956).