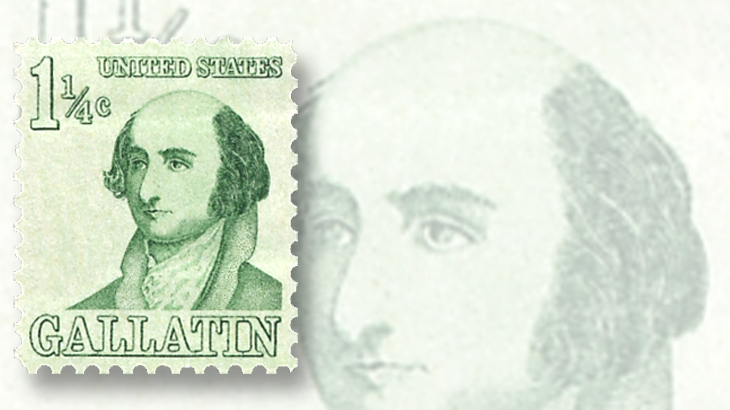 Albert Gallatin, the longest-serving Treasury secretary in U.S. history, was honored on a definitive stamp issued in 1967.

Born in what is now Geneva, Switzerland, on Jan. 29, 1761, Albert Gallatin emigrated to America in 1780 and eventually became a legislator, Secretary of the Treasury, and U.S. ambassador.

Gallatin lived in Boston, Mass., and served in the Army during the Revolutionary War. He taught French at Harvard University before moving to Pennsylvania, where he was elected to the U.S. Senate in 1793. But when questions arose over his meeting the citizenship requirements, the election results were nullified by the Senate.

He was elected to Congress in 1795, and chosen by President Thomas Jefferson to serve as Secretary of the Treasury in 1801, a post he held for almost 13 years, longer than any other Treasury secretary. He was instrumental in arranging the funding for the 1803 Louisiana Purchase.

In 1814, Gallatin was involved in negotiations for the Treaty of Ghent, ending the War of 1812 between the United States and Great Britain. He then served as the U.S. minister to France, and later, Great Britain.

During his public service, Gallatin sought the abolition of slavery. In later life he researched Native American culture and wrote a book about American Indian languages.

Gallatin died Aug. 12, 1849, shortly after the death of his wife, Hannah. He is honored on the 1¼¢ light green stamp issued Jan. 30, 1967, in the Prominent Americans definitive series.