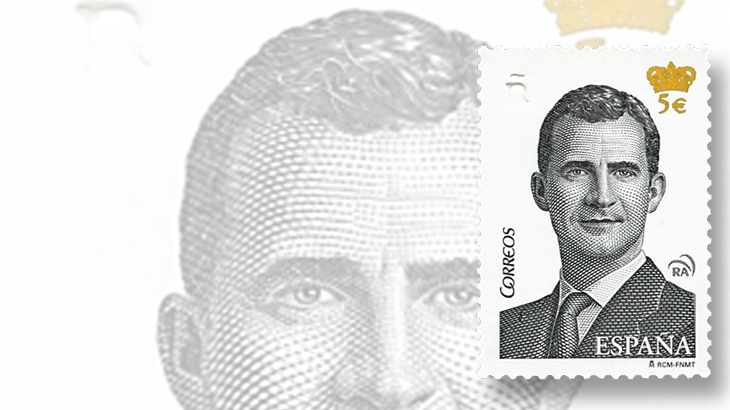 Spain's King Felipe VI was honored on this €5 stamp with engraved design issued in 2015.

Married in 2004 to Letitia Ortiz Rocasolano, King Felipe and Queen Letizia have two daughters: the heir presumptive, Leonor, Princess of Asturias (born in 2005); and Infanta Sofia (born in 2007).

The king received his early education at Santa Maria de los Rosales School in Madrid, and studied for a year at Lakefield College School in Selwyn, Ontario, Canada.

He pursued further studies at the Military Naval School in Marin and the General Air Force Academy in San Javier, completing his training as a helicopter pilot.

He earned a law degree in 1993 at the Autonomo University of Madrid, and a masters degree in international relations in 1995 at Walsh School of Foreign Service at Georgetown University in Washington D.C.

The king and queen are associated with philanthropic efforts, including the Hesperia Foundation, which promotes social projects for underprivileged youngsters.