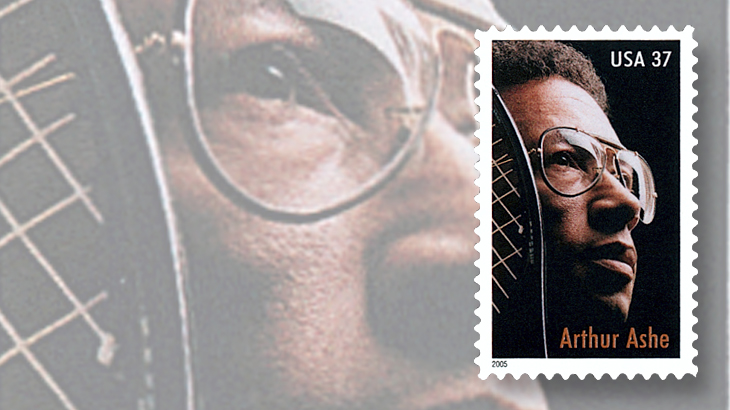 Tennis champion and human rights advocate Arthur Ashe, honored on a 37¢ stamp in 2005.

American tennis champion Arthur Ashe was born July 10, 1943, in Richmond, Va. He displayed remarkable skill at tennis at a very early age, and by his teens he was being coached by Walter Johnson, who also mentored another great African-American tennis star, Althea Gibson.

Always a top student, Ashe attended UCLA on a tennis scholarship as a member of the ROTC. In 1963 he became the first black player to be named to the United States Davis Cup team. He joined the Army after graduation and served at West Point, where he managed the academy's tennis program.

Ashe won the United States Amateur Championships while still serving in the Army, and as a professional athlete he would build a spectacular career as a champion singles and doubles player at international tournaments well into the 1970s.

In 1985, Ashe was named to the International Tennis Hall of Fame.

Ashe was a lifelong leader in social activism, and The New York Times stated in his obituary that he "dedicated himself to dismantling the barriers of poverty, privilege, racism and social stereotyping."

With a family history of heart disease, Ashe suffered a heart attack in 1979 requiring bypass surgery. A second heart surgery followed four years later, and in 1988 Ashe learned he was HIV positive; it is believed he contracted the illness from a blood transfusion during the second heart surgery.

Ashe worked actively to increase public awareness of AIDS and HIV during his final years. He died Feb. 6, 1993.

The 37¢ Arthur Ashe stamp (Scott 3936) was issued Aug. 27, 2005, to honor Ashe's many sports achievements, as well as his dedicated humanitarian efforts.