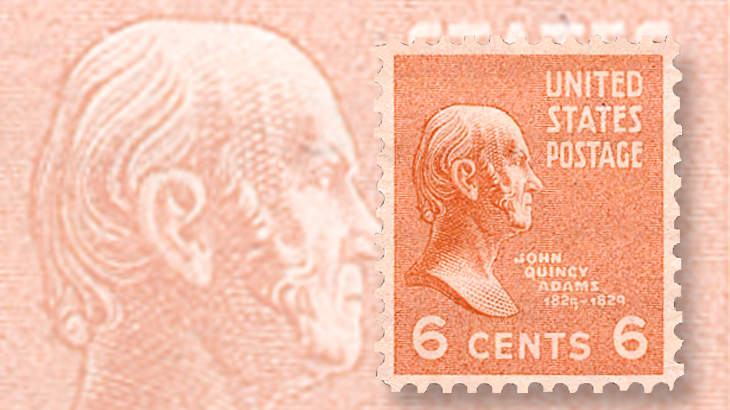 The sixth United States president, John Quincy Adams, was honored on a 6¢ stamp in the 1938 Presidential definitive series.

Born July 11, 1767, in Braintree, Mass., John Quincy Adams was 30 years old when his father, John Adams, took office in 1797 as the second president of the United States.

The younger Adams had already served his country as the diplomatic minister to the Netherlands and Portugal, and during much of his father's presidency he was the American minister to Prussia.

He was elected to the U.S. Senate in 1802, but returned to a diplomatic post as minister to Russia in 1809, and was later instrumental in negotiating the 1814 Treaty of Ghent, ending the War of 1812.

Adams was selected by the nation's fifth president, James Monroe, to serve as Secretary of State from 1817-25; in that post Adams wrote the Monroe Doctrine, which defined U.S. foreign policy with regard to European nations, their colonizing efforts, and U.S. intentions in international affairs.

Despite his diplomatic successes, Adams won the presidency in the election of 1824 only after a tight battle that ended with a decision rendered by the House of Representatives because no candidate had captured a majority of the electoral votes.

Andrew Jackson, who ran against Adams in the election, and who had bested him in the popular and electoral vote, continued his opposition when Adams became the nation's sixth president.

With the powerful Jackson working against him, Adams was less successful as president than he had been as Secretary of State, though he almost eliminated the nation's debt and brought about the construction of roads and canal networks that would help the country grow.

In the election of 1828, Adams lost to Jackson, but rather than retiring, he chose to continue his political life as a longtime Congressional representative from Massachusetts.