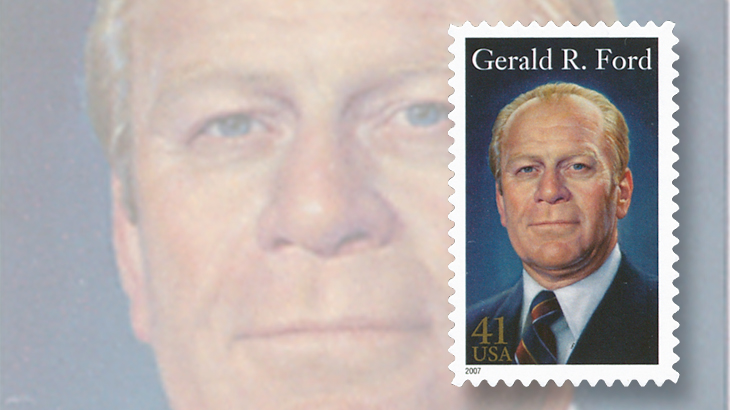 Gerald R. Ford Jr., the 38th president of the United States, was born Leslie Lynch King Jr. on July 14, 1913, in Omaha, Neb. His parents separated just weeks after he was born, and Ford was renamed for the man his mother married in Grand Rapids, Mich., in 1916.

Ford was an outstanding athlete and football star at Grand Rapids South High School and the University of Michigan. After his college graduation he studied at Yale, earning his law degree in 1941.

The following year he joined the U.S. Naval Reserve as America entered World War II. Ford served at Navy Preflight School in Chapel Hill, N.C., and on the aircraft carrier USS Monterey in the Pacific Theater.

From 1949 to 1973, Ford represented the Grand Rapids district in the U.S. House of Representatives, and served as House minority leader from 1965 to 1973.

Following the resignation of Vice President Spiro Agnew in 1973, Ford was selected by President Richard Nixon to fill the vacated office.

Eight months later, Nixon resigned as the scandal of the Watergate Hotel break-in enveloped his presidency, and Ford became the first American to assume the nation’s highest office without being elected president or vice president.

As president, Ford was confronted with significant challenges that he had inherited, including an economy damaged by inflation that fell into recession, rising unemployment, and the final years of the war in Vietnam.

Ford was nominated as the Republican candidate for president in 1976, but lost the election to Democrat Jimmy Carter in a particularly close presidential race.