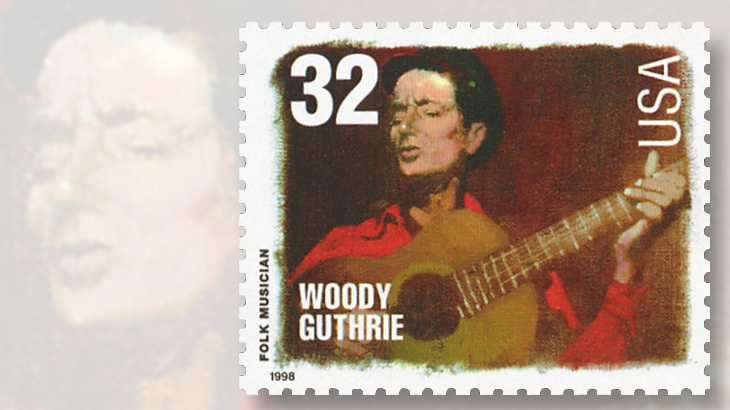 Folk music legend Woody Guthrie was commemorated on a 32¢ stamp in 1998.

By the age of 16, he was on the road, working odd jobs, playing music and writing songs. He moved to New York and began recording his Dust Bowl Ballads, and appeared on radio shows, including Pursuit of Happiness and Cavalcade of America.

He joined the Merchant Marine in 1943, the year his autobiography Bound for Glory was published.

Guthrie continued to record his songs after World War II, but in the early 1950s he was diagnosed with Huntington’s chorea, a nerve disorder that brought about his death in 1967.

Guthrie’s compositions, along with several books of published writings, form a remarkable body of work that chronicles the hard times of America during the 1930s, while expressing hope for better days.

When the 32¢ Woody Guthrie stamp was issued June 26, 1998, the United States Postal Service stated, “His best known song, This Land is Your Land, has become to many of his fans the official national anthem of America,” and added that the song reflects Guthrie’s progressive and populist vision.

Guthrie was inducted into the Rock and Roll Hall of Fame in 1988, and was honored with a Grammy Lifetime Achievement Award in 2000.

The Woody Guthrie stamp (Scott 3213) was issued as part of the Folk Musicians set in the Legends of American Music commemorative series.