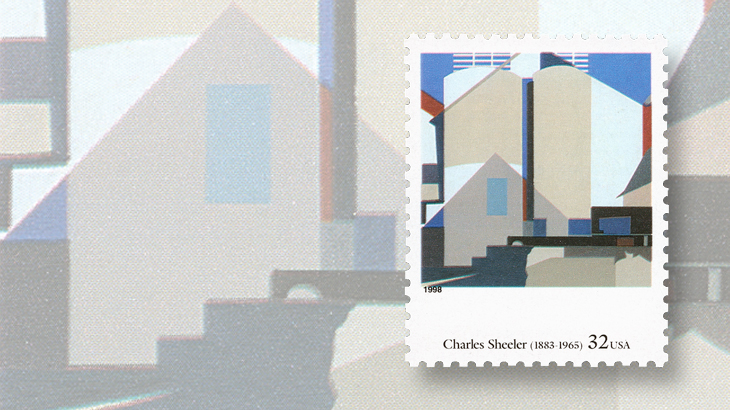 American painter and photographer Charles Sheeler, who was born in Philadelphia, Pa., on July 16, 1883, has twice been honored with a United States stamp.

The first was a 32¢ stamp featuring the 1957 painting Two Against the White (identified by some sources as Two Against White), part of the 1998 Four Centuries of American Art commemorative set of 20 stamps (Scott 3236r).

The next stamp came less than 15 years later, in the 2013 Modern Art in America set of 12. The nondenominated (46¢) forever stamp (Scott 4748h) features American Landscape, a much earlier work from 1930 that shows the Ford Motor Co. plant at River Rouge near Detroit, Mich.

He taught himself photography, initially to support himself with commercial assignments, but later explored it as an expressive art form, not unlike painting. His American Landscape and related paintings were created after Sheeler photographed the Ford automobile plant in 1927 for an advertising agency.

The inscription on the reverse of the 1998 stamp reads, in part: "Charles Sheeler (1883-1965) was a leading practitioner of the Precisionist style, which he loosely derived from European Cubism and from his own work in photography.”