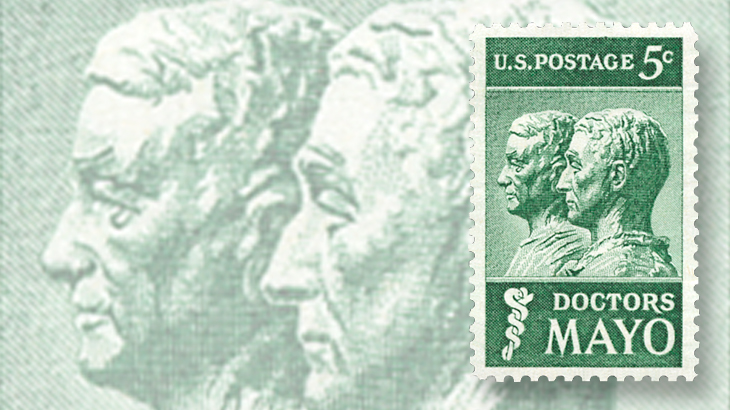 Charles Mayo is depicted at right on the 5¢ stamp commemorating him with his brother William.

The Mayo Clinic and its network of health care providers grew from the medical practice of the Mayo family in Minnesota, founded by Dr. William Worrall Mayo (1819-1911), and expanded upon by his sons William James Mayo (1861-1939) and Charles Horace Mayo (1865-1939).

He joined the family practice alongside his father and older brother, and the practice soon expanded to include other medical specialists. With a new hospital established in 1889 following a devastating tornado, the successful practice, based on partnerships and collaboration, continued to grow.

During World War I, Charles served in the Army medical corps as an advisor on surgical services. He received the U.S. Distinguished Service medal in 1920.

A 5¢ commemorative stamp issued in 1964 (Scott 1251) honors both William J. Mayo and Charles H. Mayo. The central design shows the two men in their surgical gowns, as depicted in a statue created by James Earle Fraser that normally stands outside the Mayo Civic Center in Rochester. The statue was recently moved to accommodate Civic Center renovation projects currently underway.