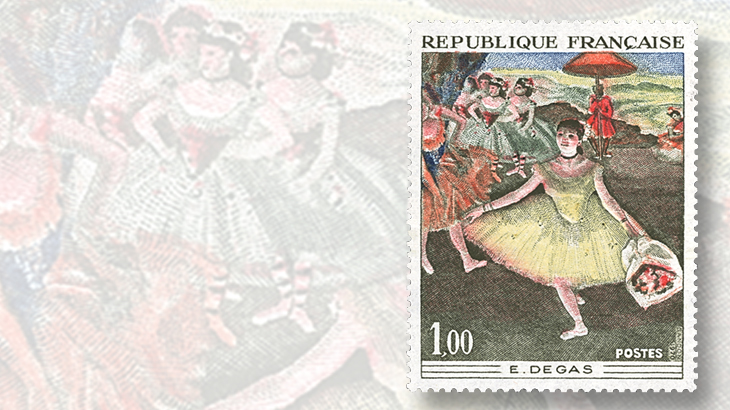 A painting by Edgar Degas featured on a 1-franc French stamp in 1970.

His father was French and his mother was from New Orleans. When the artist was in his late 30s, he spent several months living with relatives in New Orleans and completed some 20 paintings while there.

Degas exhibited artistic skill at a young age and was encouraged by his father. He trained by reproducing masterworks on display at the Louvre, and studied at the Ecole des Beaux Arts in Paris.

Degas and other artists met to stage exhibitions independent of the famous Salon, and were dubbed impressionists by the art critics. His works often feature ballet dancers or horses, not only because these popular subjects helped him sell paintings, but also because he wanted to convey the beauty of motion he found in them.

Along with painting, Degas worked in sculpture, pastel, photography, and other media.

Degas was honored by France in 1970 on a 1-franc stamp depicting a detail of his 1877 painting Dancer with Bouquet (Scott 1276). His artwork is also shown on other stamps from countries around the world.