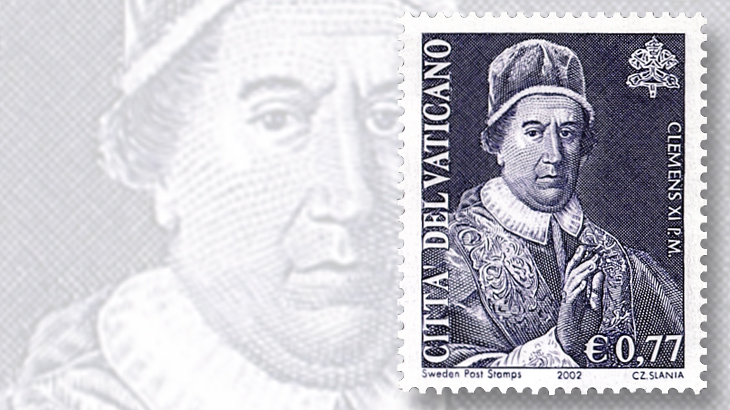 Pope Clement XI was honored on a Vatican City stamp in 2002, part of a set that also honored Pope John Paul II.

Born July 23, 1649, in Urbino, Italy, Giovanni Francesco Albani would become Pope Clement XI when he was ordained Nov. 23, 1700, following three days of consultation before the 51-year-old cardinal agreed to accept the monumental responsibilities.

Clement XI originated from a noble family with some Albanian ancestry, and he was, in fact, honored by that nation in 2007 with his portrait on a pair of se-tenant stamps denominated 30-lek and 120l (Scott 2820).

In 2002 the Pope had been honored as part of a three-stamp set from Vatican City commemorating the 300th anniversary of the Pontifical Ecclesiastical Academy, which was established with support and approval from Pope Clement XI in 1702.