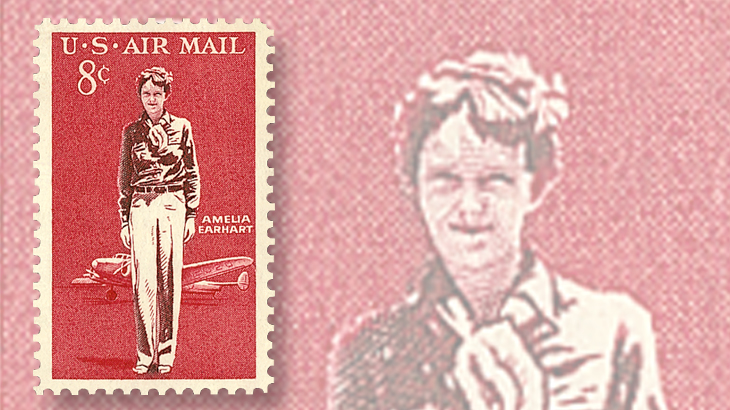 The stamp design, based on a black and white photograph, shows Earhart standing in front of her Lockheed Electra airplane, the same plane that would disappear without a trace in 1937.

Earhart learned to fly soon after she took her first ride in an airplane in 1920. Taught by another female pilot, Anita "Neta" Snook, Earhart purchased her own plane and participated in competitions and public events, promoting the role of women pilots. She was also a writer and businesswoman in the aviation industry.

In 1932 she became the second person to fly solo across the Atlantic Ocean, five years after Charles Lindbergh became the first. She was celebrated upon her return and received the Distinguished Flying Cross and the National Geographic Society gold medal.

Two years after a successful 1935 solo flight from Honolulu to Oakland, Calif., Earhart sought to fly around the world at the equator. On her second attempt, she departed from Miami on June 1, 1937, heading east with navigator Fred Noonan.

Nearly one month later, Earhart and Noonan landed in New Guinea, departing on July 2 for Howland Island, more than 2,500 miles away. Radio transmissions were received from Earhart during the flight, but the transmissions became unintelligible, and the plane and its crew were never seen again.

A massive government search and numerous private searches turned up nothing.

Over the years, bits of material that may have belonged to Earhart or originated from her plane have been found on Garner Island in Kiribati, which, like Howland Island, is a part of the Phoenix Islands group. Private search efforts continue, but the mystery of Amelia Earhart’s disappearance, for now, remains unsolved.