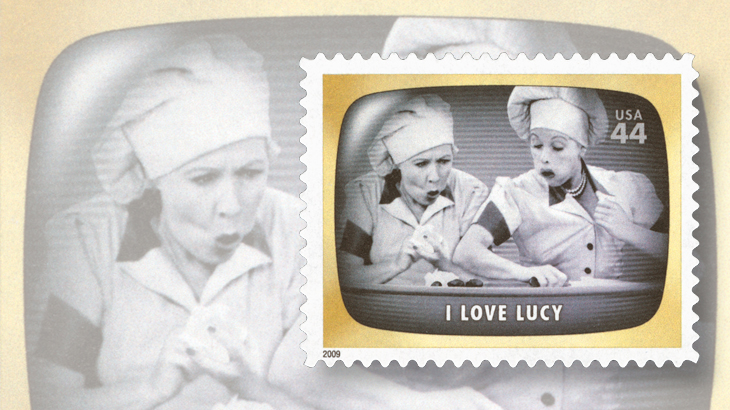 Vivian Vance, shown at left with actress Lucille Ball, was a featured performer on the popular television series I Love Lucy.

Actress Vivian Vance, who was born Vivian Roberta Jones on July 26, 1909, in Cherryvale, Kan., is best known for her television roles as Ethel Mertz, the sidekick of comic star Lucille Ball (1911-89) on the series I Love Lucy in the 1950s, and Vivian Bagley on The Lucy Show in the 1960s.

She is pictured with Ball on the 44¢ I Love Lucy stamp from the Early TV Memories set of 20 issued Aug. 11, 2009 (Scott 4414b). The stamp shows the two actresses in one of the most memorable scenes from the long-running TV series. The inscription on the back of the stamp pane liner describes the show, and the scene.

“As bandleader Ricky Ricardo and his wife, Lucy, Desi Arnaz and his real-life spouse Lucille Ball waged a comedic battle of the sexes. William Frawley and Vivian Vance played their landlords and best friends, Fred and Ethel Mertz. Lucy and Ethel had wacky adventures like the one depicted in the stamp art, with Ethel (left) and Lucy trying to keep up with candies on a conveyor belt.”

Vance was a theater actress in New Mexico and New York in the 1930s, appearing on Broadway with Danny Kaye and Eve Arden in the 1940s. After moving to California and performing in film and theater, she was hired for the role of Ethel. Vance and Ball developed a friendship that grew from their professional relationship, and which lasted until Vance’s death in 1979.