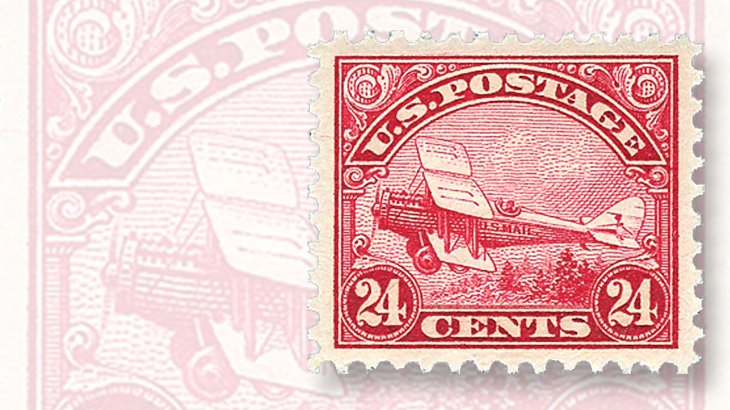 Many stamps from different countries around the world pay tribute to various models of de Havilland aircraft, including the 24¢ carmine airmail stamp issued Aug. 21, 1923, by the United States, which shows the de Havilland DH-4 biplane (Scott C6).

In the United States, the plane was adapted to carry airmail letters, and a close look at the stamp reveals “U.S. MAIL” lettered along the plane’s fuselage.

The plane was one of many engineered by Geoffrey de Havilland, who was born July 27, 1882, in High Wycombe, Buckinghamshire, England.

A pioneer in manned flight, de Havilland built and quickly crashed his first aircraft in 1909, six years after the Wright Brothers’ first successful flight. With his second effort he taught himself to fly, and then became involved in aircraft design for the Royal Aircraft Factory at Farnborough Airfield before establishing his de Havilland Aircraft Company in North London.

His most successful projects include the de Havilland DH-98 Mosquito combat plane used by the Royal Air Force during World War II.

In 1944, de Havilland was knighted. He retired in 1955, and the aircraft company he founded merged with Hawker Siddeley Co. in 1960.

Sir Geoffrey died May 21, 1965. Two of his sons were de Havilland test pilots who died in crashes during the 1940s.