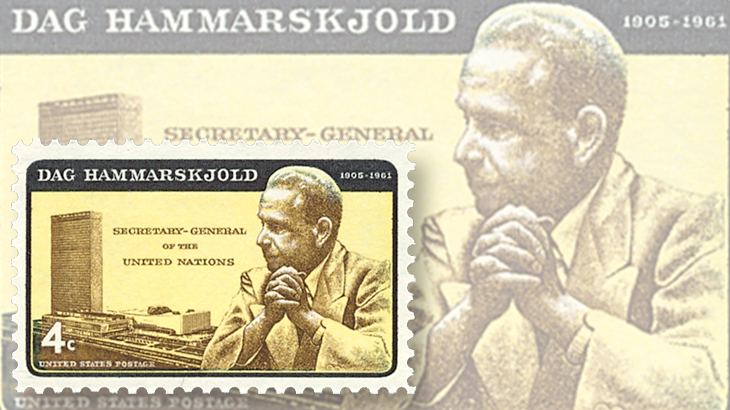 Dag Hjalmar Agne Carl Hammarskjold was born July 29, 1905, in Jonkoping, Sweden. He was secretary-general of the United Nations from 1953 until his death in 1961, and is commemorated on a 4¢ United States stamp issued the following year (Scott 1203).

Hjalmar Hammarskjold, his father, was prime minister of Sweden from 1914 to 1917.

Dag Hammarskjold attended Uppsala University where he obtained degrees in economics and law, and began working for Sweden in governmental positions related to finance and foreign affairs.

He joined the Swedish delegation to the United Nations in 1949 and was named acting chairman of the delegation in 1952. Following the 1953 resignation of UN Secretary-General Trygve Lie, Hammarskjold was elected to fill the position, and was elected for a second term in 1957.

The United Nations biography of Hammarskjold states that "During his terms as Secretary-General, Mr. Hammarsjkold carried out many responsibilities for the United Nations in the course of its efforts to prevent war and serve the other aims of the Charter." These include diplomatic activity in the Middle East, and negotiations with China for the release of detained American military pilots.

Hammarskjold was on a diplomatic mission to the Congo when the plane carrying him and 15 other passengers crashed in Northern Rhodesia (now Zambia). All on board died; one American passenger survived for five days after the crash. A UN panel began reviewing details of the mysterious crash earlier this year.

Hammarskjold was posthumously awarded the Nobel Peace Prize after being nominated before his death.

Shortly after the U.S. stamp honoring him was issued, it was intentionally reprinted with inverted yellow background after examples of the first stamp were discovered with the yellow background inverted in error. The second printing is listed as Scott 1204.