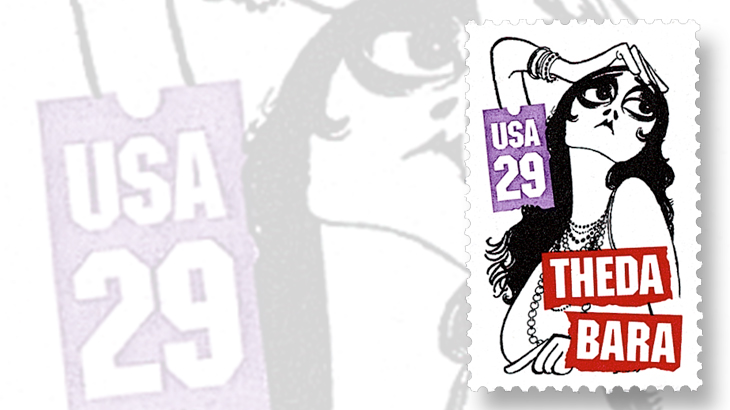 Silent screen actress Theda Bara was honored on a 29¢ stamp issued in 1994.

The United States Postal Service honored 10 stars of silent films on 29¢ stamps issued April 27, 1994, in San Francisco, Calif. Among those honored was actress Theda Bara, who was born Theodosia Burr Goodman on July 29, 1885, in Cincinnati, Ohio.

“Theda Bara is remembered as one of the most magnetic stars of the silent film era,” the Postal Service wrote in its announcement about the stamp set. “Her work in The Vampire led to the term ‘vamp’ that was so much a part of silent movies. Bara also appeared in A Fool There Was, Cleopatra, and Salome, among other films.”

Studio publicists concocted a fictional history for the Ohio-born actress to accompany her exotic appearance, claiming she was a bewitching foreign beauty with supernatural powers.

Sadly, most of Bara’s archived films were lost forever in the devastating 1937 Fox vault fire, which took place more than a decade after Bara permanently retired from filmmaking.

She died April 7, 1955, and five years later a star on the Hollywood Walk of Fame was dedicated to her.

The illustration on the Theda Bara stamp (Scott 2827) was created by noted American caricaturist Al Hirschfeld.