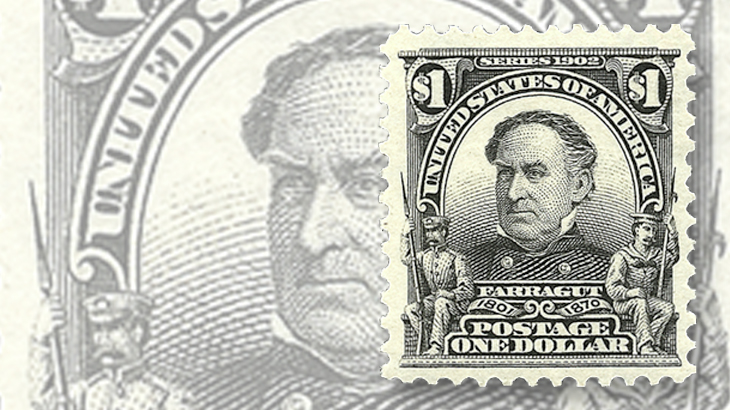 A $1 stamp for David G. Farragut was issued in 1903 in honor of his actions as a naval officer during the American Civil War.

A leader of the Union forces during the Civil War, naval officer David G. Farragut first appeared on a United States stamp in 1903 as part of the 1902-03 Second Bureau Issue of engraved definitives.

The 1995 stamp set commemorating individuals and events of the Civil War included a 32¢ stamp for Farragut (Scott 2975g). The back of that stamp bears an inscription that reads: “Union Vice Admiral David Glasgow Farragut, 1801-1870. A midshipman at age 9. Electrified the North with daring naval assault to capture New Orleans. Yelled ‘Damn the torpedoes! Full speed ahead!' during the attack at Mobile Bay.”

Text inscribed on the stamp panes containing the 2012 stamp commemorating the Battle of New Orleans (Scott 4664) and the 2014 Battle of Mobile Bay stamp (4911) both describe Farragut’s key role in those decisive battles.