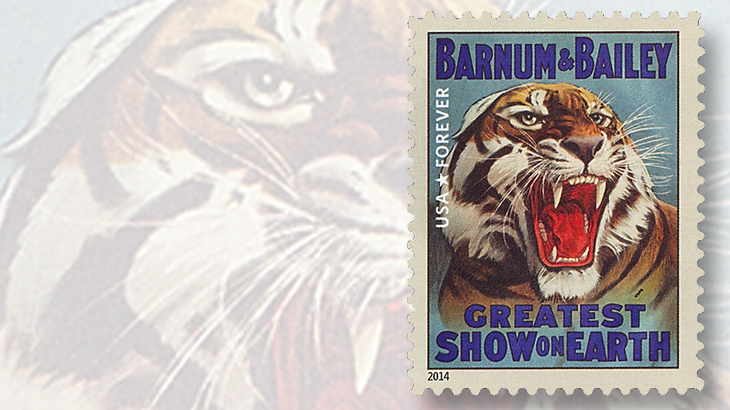 The last name of circus showman and businessman P.T. Barnum appears on four of the eight Circus Posters forever stamps issued in 2014.

Phineas Taylor Barnum was born July 5, 1810, in Bethel, Conn. As P.T. Barnum, he would become known as the ultimate American showman, promoting all manner of real and concocted oddities on tours and in his Barnum’s American Museum in New York City.

Visitors flocked to see exaggerated creations such as the “Feejee Mermaid” (a sewn-together monkey torso and fish tail), animal acts, and humans with physical abnormalities or unusual abilities. He toured at length with Charles Sherwood Stratton, a youngster who, at 2 feet 5 inches tall, was billed as General Tom Thumb.

Barnum would also promote the successful first American tour of the Swedish opera singer Jenny Lind, known as the “Swedish Nightingale,” in 1850.

After the Civil War, Barnum served four terms as a Republican representative to the Connecticut legislature. He supported African-American suffrage and stood opposed to contraception and alcohol consumption. He later served as mayor of Bridgeport, Conn.

The wealthy showman was also a noted philanthropist who supported community projects.

It wasn’t until 1870, at age 60, that Barnum entered the circus business, merging with James A. Bailey in 1881 to create what would soon be known as the Barnum and Bailey Circus, the Greatest Show on Earth.

Barnum died in 1891, and Bailey in 1906. The circus was later bought by the Ringling Bros. and merged with their existing World’s Greatest Shows.