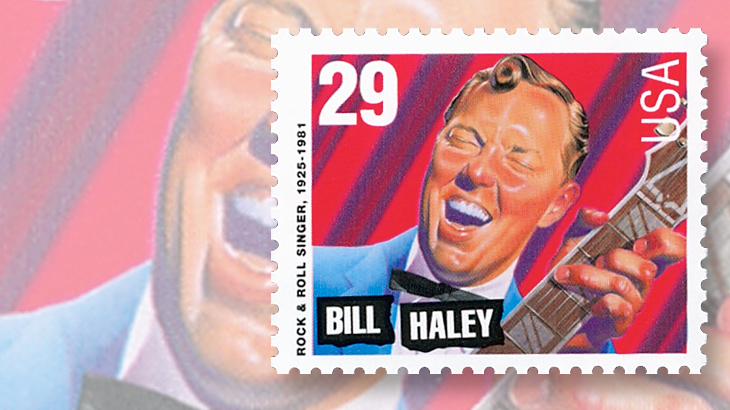 Rock 'n' Roll pioneer Bill Haley, the bandleader and guitarist who recorded "Rock Around the Clock," was honored on a 29¢ stamp in 1993.

When the United States Postal Service chose to honor pioneers of rock ‘n’ roll in 1993, it began with a single 29¢ Elvis Presley stamp on Jan. 8 (Scott 2721). But on June 9, a set was issued honoring Presley and six other musicians: three rhythm and blues singers, and three more rock stars, including Bill Haley (Scott 2725, 2732).

When the 1993 stamps were issued, the Postal Service provided this biography: “Bill Haley and His Comets began playing country and western music. When they added rhythm and blues to their renditions, they became trailblazers of a totally new sound. Their 1955 classic Rock Around the Clock sold more than 22 million copies.”

Haley and his Comets displayed their rockabilly style on many popular records, including Rocket 88 and Shake, Rattle and Roll, and pioneered their rocking sound with hits like Crazy Man, Crazy (which Haley wrote).