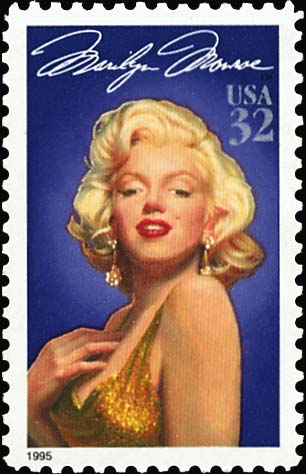 When the 32¢ Marilyn Monroe stamp was issued June 1, 1995 (Scott 2967), it was the first issue in the Legends of Hollywood commemorative series that continues today.

Monroe was born Norma Jeane Mortenson on June 1, 1926, in Los Angeles, Calif. She suffered a tumultuous and often tragic childhood, with an absent father and a mentally unstable mother, and she lived in changing foster care environments during many of those early years.

Marrying young, she worked in a munitions factory during the Second World War while her husband served in the Merchant Marine. The marriage ended as Monroe found work as a pin-up, fashion model and actress.

She was featured in supporting roles through the 1940s and was signed to a film contract by 20th Century Fox.

Her film roles slowly increased in stature and Monroe became well known to the American public. In 1952 she appeared with Cary Grant and Ginger Rogers in Monkey Business. She starred in the 1953 thriller Niagara opposite Joseph Cotten.

Monroe was married to baseball star Joe DiMaggio in 1954, but they divorced before the year had ended. Her marriage in 1956 to playwright Arthur Miller lasted five years, and also ended in divorce.

Marilyn Monroe died at age 36 on Aug. 5, 1962. The cause of death was recorded as barbiturate drug overdose.

Below the enlarged portrait of Monroe on the right side of the pane of 20 stamps is printed: "Few other actresses personified the phrase 'Hollywood movie star' as did Marilyn Monroe (1926-1962). Classically beautiful, Marilyn set the motion picture standard for glamour and sensuality in film favorites such as Some Like it Hot, Gentlemen Prefer Blondes, Bus Stop and The Seven Year Itch."