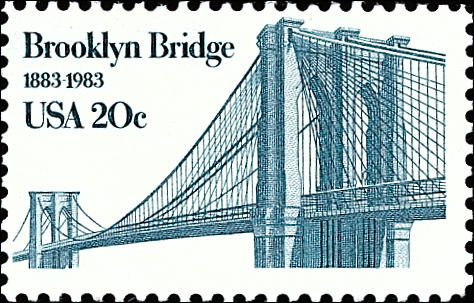 Work on the Niagara Falls Suspension Bridge was started in the 1840s by Charles Ellet Jr., but Ellet quit after a dispute, and Roebling was hired to complete the project. It was the world’s first working railway suspension bridge, connecting Niagara Falls, N.Y., with Niagara Falls, Ontario.

Roebling, who had studied at the Royal Building Academy in Berlin, immigrated to the United States when he was 25, and became an American citizen in 1837. Soon after he established a successful wire rope manufacturing business as John Roebling.

He was appointed chief engineer of the Brooklyn Bridge project in 1867 after his design for the span was accepted. A freak accident two years later that crushed Roebling’s toes quickly led to tetanus, and his death on July 22, 1869. Work on the bridge was completed by Roebling’s son.

The John Roebling and Sons firm would later undertake work on the Golden Gate Bridge in California.