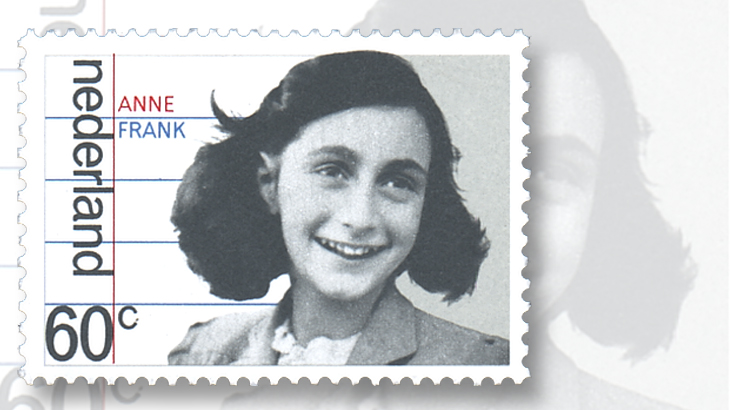 Anne Frank was honored on a 60¢ stamp issued by the Netherlands in 1980.

The young German-born diarist Anne Frank and her older sister Margot died tragically in March 1945, both suffering from typhus at the Bergen-Belsen concentration camp in northern Germany. Margot was probably just past her 19th birthday, and Anne, who was born June 12, 1929, in Frankfurt, was only 15.

As the Nazis gained power in Germany in the 1930s, the Jewish family of Otto and Edith Frank and their two daughters moved to Amsterdam in the Netherlands, hoping to escape persecution.

However, the Nazis occupied Amsterdam in May 1940. As the threat of deportation to a concentration camp arose in July 1942, the Frank family went into hiding in a hidden apartment in the city. They were aided by Dutch friends who provided them with meals and information, and kept their whereabouts a secret.

During this time Anne began keeping a diary that was published after her death as The Diary of a Young Girl. She chronicled her thoughts, her feelings and her experiences in entries from June 14, 1942, until Aug.1, 1944, three days before the family was betrayed by an unknown individual and arrested by German authorities.

The family was sent to the Westerbork detention and transit camp before being transported to the Auschwitz concentration camp in what is now southern Poland. In October 1944, Anne and Margot were sent to Bergen-Belsen, where they died some five months later.

The diary Anne had written was saved by some of the family’s helpers, and was returned to Anne’s father, who survived his imprisonment and published the writings after the war.

Anne Frank has been honored on stamps from countries including both Germany and the Netherlands. A 60¢ stamp from the Netherlands (Scott 598) was issued April 25, 1980.