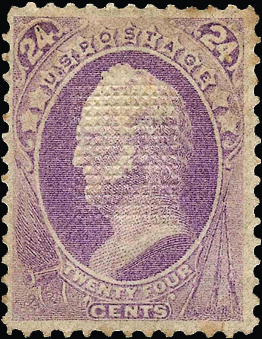 Gen. Winfield Scott was born June 13, 1786, in Dinwiddie County, Va. Though he briefly studied law, he entered the United States Army, commissioned as a captain, in 1808. He served for more than 50 years, and was active in both the War of 1812 and the Civil War.

For his devotion to military discipline and dress, he was known as “Old Fuss and Feathers.”

Captured by the British during the War of 1812, he was released in a prisoner exchange and became a national hero for his successes in the ensuing battles. He was promoted to the rank of general in 1814.

Scott would lead forces during the Second Seminole War, and would command the 1836 forced relocation of the Cherokee nation as part of the disastrous “Trail of Tears.”

As the Civil War began, Scott was well into his seventies and his health was suffering. He helped to shape the Union strategy to weaken the Confederacy, but resigned Nov. 1, 1861. He died May 29, 1866.

The first stamp honoring Scott, a 24¢ issue in the 1870 definitive series (Scott 142) pays tribute to his storied military career with elements bordering the portrait. The U.S. Postal Service notes: “In the left lower corner appears a flag, loosely gathered around its staff, the muzzle end and part of the wheels of a piece of field artillery, and a pile of shells. In the right are three muskets stacked.”