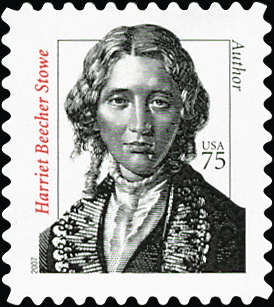 The daughter of a minister who preached against slavery, she moved to Cincinnati in 1832 and married Calvin E. Stowe, another ardent slavery critic.

Harriet Stowe began publishing short stories and sketches, poems and hymns. The family moved to Maine in 1850, and while on the faculty of Bowdoin College she began work on Uncle Tom’s Cabin, intending to convey to Americans the tragedy and horror of slavery.

The book was an enormous success, and has been considered a significant element in the anti-slavery movement that would lead the nation into Civil War.

It has been reported that Abraham Lincoln, meeting Stowe for the first time in 1862, remarked, “So you are the little woman who wrote the book that started this great war.”

Stowe traveled overseas and spoke out against slavery while continuing to write in her later years. She died July 1, 1896.