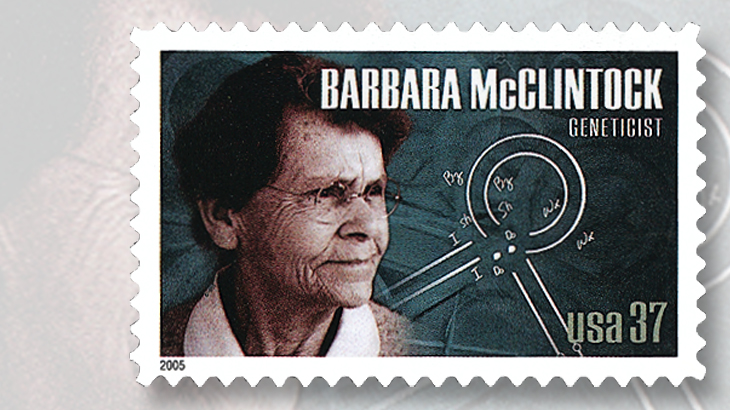 Barbara McClintock was honored on a 37¢ stamp in the 2005 American Scientists set of four.

She studied botany and genetics at Cornell University’s College of Agriculture in Ithaca, N.Y., earning her doctorate in 1927.

She began work as a botany instructor and researcher at Cornell, making breakthroughs in the study of chromosomes in corn plants. In 1936, she began working in the Department of Botany at the University of Missouri, and in 1941 she joined the staff at Cold Spring Harbor Laboratory in New York.

“In 1983, the renowned geneticist Barbara McClintock received the Nobel Prize in the category of ‘Physiology or Medicine’ for discovering genetic transposition,” the United States Postal Service reported when the 37¢ stamp honoring McClintock (Scott 3906) was issued May 4, 2005, in the American Scientists set of four.

“McClintock’s research on Indian corn plants led to her discovery that genetic material can change positions on a chromosome or move from one chromosome to another. Her discovery was confirmed immediately in corn and in the 1960s and 1970s in bacteria and other organisms.”