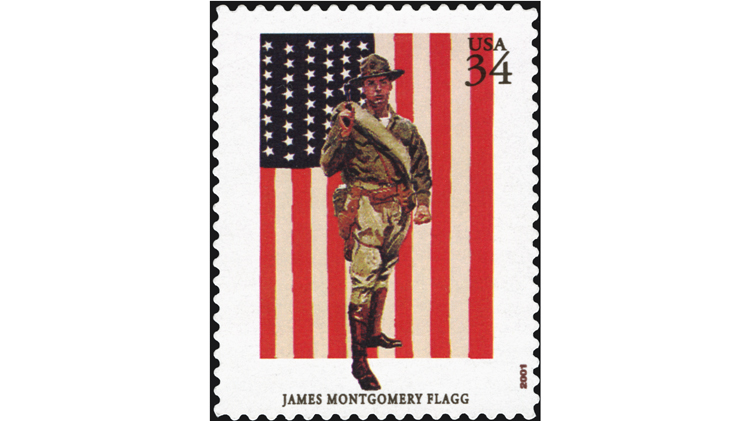 The man who created the iconic Uncle Sam army recruitment poster was artist James Montgomery Flagg, who was born June 18, 1877.

That poster was featured on a 32¢ stamp commemorating the U.S. entry into World War I, as part of the Celebrate the Century issue from 1998 recalling the decade of the 1910s (Scott 3183i).

Just three years later, another Flagg illustration would appear on a U.S. stamp, this time specifically honoring the famous illustrator and his work.

It shows another patriotic image titled First in the Fight, Always Faithful, a U.S. Marine Corps poster from around 1918 (Scott 3502a). The stamp is from a set of 20 issued to celebrate American illustrators.

The subject summary for this poster prepared by the Library of Congress reads: “A U.S. Marine, in combat uniform, standing, full-length, facing front, holding handgun, against background of U.S. flag.”

On the reverse of the liner backing of the self-adhesive stamp is a short description of the artist.

“James Montgomery Flagg (1877-1960) was an outspoken celebrity known as much for his wit as for his drawings of glamorous women. He was his own model for a magazine cover of Uncle Same proclaiming ‘I Want You,’ which became one of his many military recruitment posters.”

Flagg was born in Pelham Manor, Westchester County, N.Y. After attending the Art Students League of New York he studied in Europe. The Uncle Sam poster was created in 1917, though the character of Uncle Sam had been serving as a representation of America for at least a century prior to that date.

Flagg was also a cartoonist and portrait artist, and wrote and acted in a number of comedy short films during 1918-19.