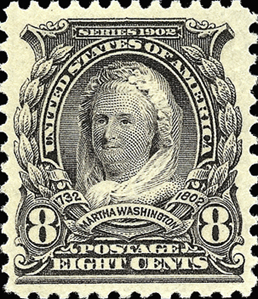 In the first week of 1759, just a year and a half after the death of her first husband, a wealthy landowner named Daniel Parke Custis, Martha would marry her second husband, another successful Virginia planter and prominent military leader who had recently resigned his commission.

Thirty years later her husband, George Washington, would be president of the United States after leading the young nation through its Revolutionary War.

Martha Washington was the first woman to be honored on a U.S. definitive stamp, the 1902 8¢ stamp (Scott 306) described as violet black by the Scott Specialized Catalogue of United States Stamps and Covers. The stamp was part of the 1902 series printed by the Bureau of Engraving and Printing. Husband George appeared on the 2¢ carmine stamp (301) in the same series.

In 1923, a new 4¢ brown Martha Washington stamp (Scott 556) was issued in the definitive series that began the previous year.

The 1938 Presidential definitive series included a 1½¢ brown stamp that shows Martha in profile (805).

These two later issues were also printed in different perforation varieties, so that in all there are 10 major varieties of definitive stamps featuring Martha Washington.

More than 75 years have passed since the last of these major varieties was issued.