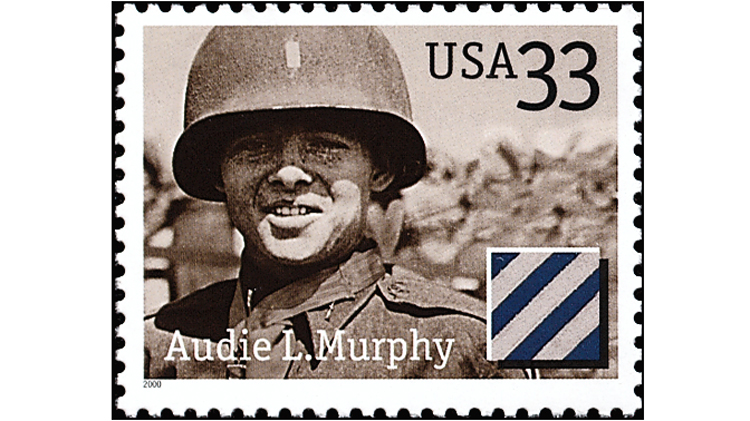 Audie Leon Murphy has been called America's most decorated World War II combat soldier. Born June 20, 1925, Murphy and his older sister falsified a birth certificate so he could enter military service at age 17.

Murphy's parents were sharecroppers in Kingston, Texas, and he left school at an early age to pick cotton and to help support the struggling family. His father left the family in 1936, and his mother died in 1941. His brothers and sisters were placed in orphanages, and with World War II underway, Murphy sought to join the service.

Initially turned away because he didn't meet the necessary height requirements for the Marines, he was accepted into the infantry and proved his skill in North Africa and Europe. He participated in the invasion of southern France and was promoted and decorated for bravery.

During a 1945 battle in eastern France, Murphy singlehandedly held off advancing German troops and led his men to safety. He was later awarded the Medal of Honor for his actions. He was also awarded two Silver Stars, a Bronze Star, three Purple Hearts, and other meritorious commendations and awards of valor.

Recognized as an undisputed war hero, Murphy found a career after the war as an actor in motion pictures, but his life was disrupted by what is now identified as post-traumatic stress disorder. Murphy displayed his great courage once again as he sought to increase awareness of PTSD by speaking openly about his struggles.

Murphy died May 28, 1971, in a plane crash in the mountains of Virginia. He is buried at Arlington National Cemetery.