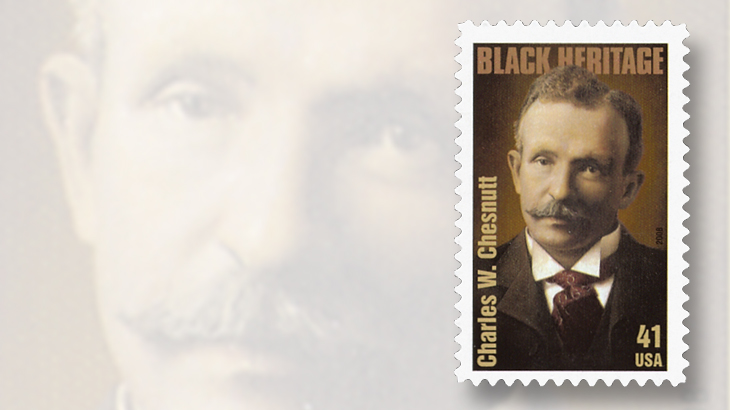 Author and social activist Charles W. Chesnutt was honored on a 41¢ stamp in the Black Heritage series in 2008.

Charles Waddell Chesnutt was born June 20, 1858, in Cleveland, Ohio, the son of free blacks and the grandson of a white slave owner. Originally a teacher and public school principal, he studied law and was admitted to the Ohio bar in 1887. He worked as a law firm stenographer, and began his own successful legal stenography practice.

At the same time, Chesnutt was also publishing his first stories, addressing concerns of racial identity, mixed race heritage, and prejudice. His story Uncle Peter’s House was published in a local newspaper in 1885, and The Goophered Grapevine was featured two years later in the Atlantic Monthly.

Chesnutt was honored Jan. 31, 2008, on a 41¢ stamp in the Black Heritage commemorative series (Scott 4222). On the liner paper behind each stamp in the pane is a brief biographical summary: “Charles W. Chesnutt (1858-1932) is recognized today as a major innovator among turn-of-the-century literary realists. In novels such as The Marrow of Tradition and short stories such as those collected in The Conjure Woman he probed the color line in American life.”

Chesnutt also wrote a biography of abolitionist Frederick Douglass that was published in 1899. In later years, he became a prominent voice in the civil rights movement, contributing essays and giving speeches on the subject of race relations.

In 1928, Chesnutt was awarded the prestigious NAACP Spingarn Medal, acknowledging his “pioneer work as a literary artist depicting the life and struggles of Americans of Negro descent, and for his long and useful career as scholar, worker, and freeman.”