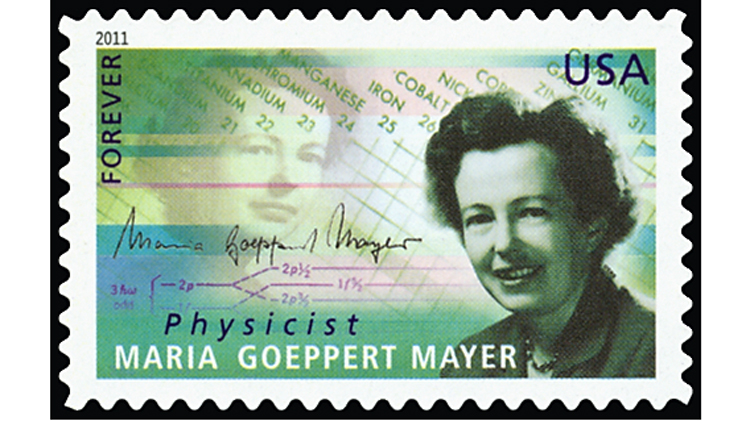 Nobel Prize-winning physicist Maria Goeppert Mayer was born June 28, 1906, in Katowice (Kattowitz), a city in southwestern Poland which, at the time, was part of the German Empire. The Goeppert family moved to Goettingen, Germany, where Mayer's father Friedrich was a university professor.

Maria studied physics at the University at Goettingen, receiving her doctorate in theoretical physics in 1930.

That year she married American chemist Joseph Mayer and moved to the United States. Universities refused to hire both husband and wife, so Maria Mayer worked as a volunteer researcher and published her findings.

Maria Goeppert Mayer was featured on a commemorative forever stamp in 2011 (Scott 4543), issued as part of a set of four honoring American scientists.

The Postal Service describes the design as showing “photographs of Mayer, circa 1940s; Mayer’s autograph, in a book by British physicist James Jeans that she used in her teaching; part of a chart of the elements and isotopes with ‘magic numbers,’ from an article Mayer published in Scientific American in 1951; and a schematic diagram of nuclear shell levels, from Mayer and Jensen’s Elementary Theory of Nuclear Shell Structure.”