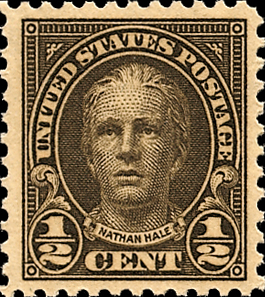 Capt. Nathan Hale, the 21-year-old Revolutionary War patriot executed by the British, was born 260 years ago on June 6, 1755, in Coventry, Conn.

Hale attended Yale College at age 14, graduating at 18 and embarking on a teaching career.

Captivated by the ideal of American independence, he joined the Connecticut militia in 1775, commissioned as a lieutenant. Stationed first in the vicinity of Boston, his regiment then advanced to Manhattan as the army sought to defend New York from advancing British troops.

Desperate for knowledge of the British plans, Gen. Washington turned to Col. Knowlton, who asked for a volunteer for the dangerous spying mission. Only Hale, then a captain, stepped forward.

Dressed in disguise, he crossed into British territory and gathered intelligence, but was captured by the British as he sought to return to the American camp. With his notes of British positions discovered, he was quickly deemed a spy and sentenced by British Gen. William Howe to execution by hanging the next day.

The reports of Hale’s death are mostly secondhand, but he is attributed with facing his enemy and saying, “I only regret that I have but one life to lose for my country.”