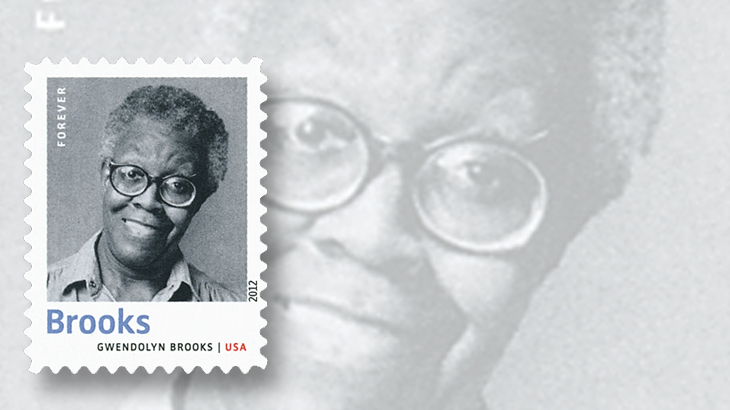 Poet Gwendolyn Brooks of Chicago was honored on a forever stamp issued in 2012.

American poet Gwendolyn Brooks was born June 7, 1917, in Topeka, Kan., moving with her family to Chicago six weeks later. She was 13 years old when a poem she wrote was first published in a children’s magazine, American Childhood. While still in school, more of her poetry was published in an African-American newspaper, Chicago Defender.

She studied at Woodrow Wilson Junior College, which has since been renamed Kennedy-King College as part of City Colleges of Chicago. To support herself, Brooks initially worked as a typist.

Her first book of collected poems, A Street in Bronzeville, was published in 1945. She was already showing a mastery of poetic form and an attention to themes of struggling in the often harsh world of Chicago’s south side.

Her second book, Annie Allen, was awarded the Pulitzer Prize, making Brooks the first black writer to receive the award.

Brooks published her only novel, Maud Martha, in 1953, and continued to publish poetry and prose throughout her life. She was also active as a mentor encouraging young poets.

She received many awards, including her selection as Consultant in Poetry (Poet Laureate) to the Library of Congress in 1985, and as the National Endowment for the Humanities’ Jefferson Lecturer in 1994. She was presented with the National Medal of the Arts in 1995.

Brooks was honored on a U.S. commemorative forever stamp issued April 21, 2012, as part of the Twentieth Century Poets set (Scott 4655).