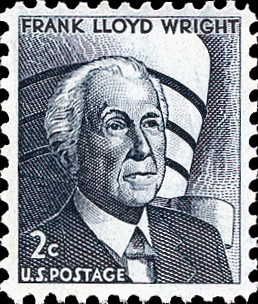 The world-famous architect and designer Frank Lloyd Wright was born in Richland Center, Wis., on June 8, 1867.

He studied at the University of Wisconsin at Madison, but left school and was apprenticed to famed architect Louis Sullivan, whose design of the National Farmer’s Bank in Owatonna, Minn., is featured on the 18¢ Architecture stamp issued in 1981 (Scott 1931).

Wright struck out on his own after two years with Sullivan and began designing homes and office buildings. He described his architectural style as organic, building upon the environment and the harmony that should exist between a structure and its surroundings.

Wright developed his own home and studio in Oak Park, Ill.; the Imperial Hotel in Tokyo; the Robie House in Chicago; Taliesin in Wisconsin; and many other prominent structures.