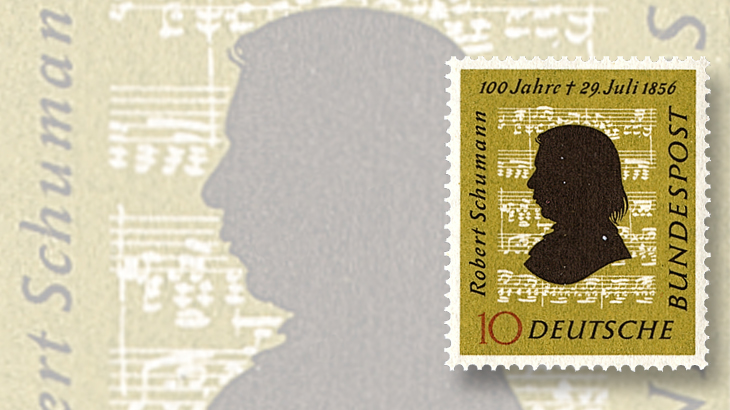 This 10-pfennig tribute to composer Robert Schumann was issued by Germany in 1956.

German Romantic-era composer Robert Schumann was born June 8, 1810, in Zwickau, in the Kingdom of Saxony (now Germany). Schumann exhibited talent for piano and composition at an early age, and also expressed himself through writing and poetry.

While studying law at Leipzig University, he became more involved with the music scene, but a permanent injury to his hand resulted in his focus turning to composition. He also wrote about music for a weekly magazine.

His early compositions were primarily for the piano, but with the encouragement of his musician wife Clara, whom he married in 1840, Schumann began work on his first symphony, which premiered in 1841.

Throughout his career, Schumann suffered from psychological instability that included debilitating bouts of depression. He continued to compose with success, producing lieder (songs), quintets, concertos, and three more symphonies. But by 1854, he asked to be confined to an asylum, where he died two years later.

Schumann has been honored on several stamps worldwide, including a 10-pfennig commemorative from Germany issued July 28, 1956, to mark the centenary of his death (Scott 743).