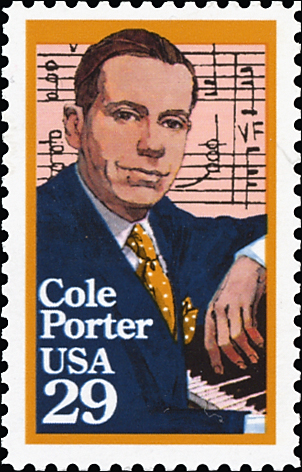 Songwriter Cole Porter was born June 9, 1891, on a farm in Peru, Ind. His musical skills became apparent at a young age, but influenced by his maternal grandfather, he made the decision to attend Harvard Law School.

After transferring to the School of Music, Porter collaborated with another student to write the musical See America First that was produced on Broadway, albeit without success, in 1916.

Porter traveled to Europe, met and married Linda Lee Thomas, and further developed his songwriting. After receiving a sizeable inheritance from his grandfather, the Porters lived an extravagant lifestyle on the continent.

By 1928 Porter was finding success with the musical Paris, which included the hit Let's Do It, Let's Fall in Love.

A lengthy run of Broadway and film successes featuring Porter's songs followed. Some of his best known compositions include Anything Goes, I Get A Kick Out of You, Begin the Beguine, In the Still of the Night and Let's Misbehave.

Badly hurt while horseback riding in 1937, Porter contended with pain from the accident for many years. His injured right leg was amputated in 1958, and he died of kidney failure on Oct. 15, 1964.

On June 8, 1991, just one day shy of Porter's birth centenary, a 29¢ commemorative stamp honoring him was issued in the Performing Arts series (Scott 2550).