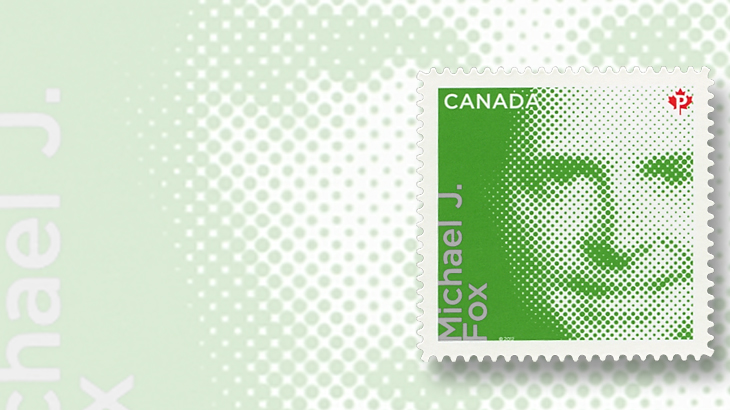 Actor Michael J. Fox is pictured on a permanent-rate stamp issued by Canada in 2012.

Actor and health research activist Michael J. Fox was born Michael Andrew Fox on June 9, 1961, in Edmonton, Alberta, Canada. An established television actor in Canada, he took the name Michael J. Fox after moving to the United States at age 18 and registering with the Screen Actors Guild.

While in Canada, Fox was featured in a half-hour television sitcom, Leo and Me, airing on CBC. Soon after his relocation, he appeared in two U.S. films before landing the role that made him a familiar face to millions of television viewers, as Michael P. Keaton in the NBC comedy Family Ties, which ran from 1982 to 1989.

In 1991, Fox was diagnosed with Parkinson’s disease, which he announced publicly in 1998. He continued to star in numerous movies and another successful TV show, ABC’s Spin City, which ran from 1996 to 2002. He later took on recurring roles on Boston Legal on ABC, and The Good Wife on CBS.

Fox has scaled back his movie work but still makes guest appearances in television episodes and has done voice-over work and cameo appearances for films.

In 2000, he established the Michael J. Fox Foundation for Parkinson’s Research, which funds Parkinson’s disease research with the goal of eliminating the disease. He has made many public appearances speaking about the efforts underway to achieve that goal.

Fox is married to actress Tracy Pollan, who appeared as his character’s girlfriend on Family Ties. The couple have four children.

The four permanent-rate Difference Makers stamps issued by Canada Post on May 22, 2012, include one design honoring Fox. The stamp exists in two varieties (Scott 2549d, 2553).