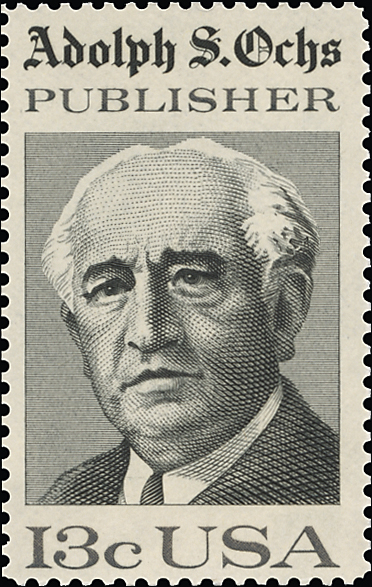 If the name and the face on the 1976 13¢ stamp are not familiar, you might find a clue in the distinctive lettering that spells out the name Adolph S. Ochs.

Ochs was born March 12, 1858, and was the publisher and owner of The New York Times for nearly 40 years.

The lettering on the stamp (Scott 1700) closely resembles the lettering used for the nameplate of the newspaper sometimes known as the Gray Lady.

Ochs was born in Cincinnati, Ohio. After his family moved to Tennessee, he worked for a while as an office boy at the Knoxville Chronicle, returning to the paper some years later while completing his studies. At age 20 he bought a controlling interest in The Chattanooga Times with borrowed funds, rescuing the paper from financial failure and growing it into a successful venture.

In 1896 he learned that The New York Times, also struggling financially, was available for purchase, and he again borrowed money to complete the acquisition. The famous Times slogan, "All the News That's Fit to Print," was implemented by Ochs, and the paper's failing fortunes were reversed when he reduced its price, added a book review supplement and instituted a strict policy of impartial reporting, instigating an unrelenting rise in circulation.

Ochs was publisher of the Times and a director of the Associated Press when he died in 1935.