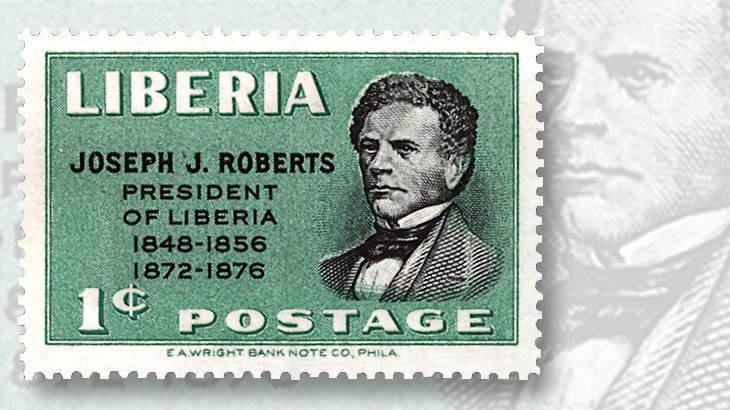 Liberia's first president, Joseph Jenkins Roberts, on a 1¢ stamp issued in 1950. Roberts was born in Virginia.

The first president of the West African nation of Liberia, Joseph Jenkins Roberts, was born March 15, 1809, in Norfolk, Va. His mother, Amelia, was a freed slave, and it is believed that Joseph’s father was the white slave owner who released her from bondage.

James Roberts, a freed black man who operated a business transporting goods by boat on the James River, married Amelia and became the father to her children. As a youngster, Joseph worked with James in the family business, but James died after the family moved to Petersburg, Va.

In 1829, the extended family that included Joseph, his new wife Sarah and their infant child, plus Joseph’s mother and younger siblings, all emigrated to Liberia, where a colony of free blacks from America had been established by the American Colonization Society.

Joseph’s wife and child died not long after arriving in Africa, but Joseph established a successful business and remarried. He became sheriff and then governor of the colony, and when Liberia declared its independence in 1847, he was elected president.

Roberts traveled to Europe and the United States, seeking trade opportunities and recognition for Liberia from other countries. He served as the country’s president until 1856, and co-founded Liberia College in the capital, Monrovia. He later served again as president, from 1872 to 1876, but died at age 66 soon after leaving office.

Several stamps from Liberia have honored the nation’s American-born first president, including a 1¢ green and black stamp with engraved design issued in 1950 (Scott 328).