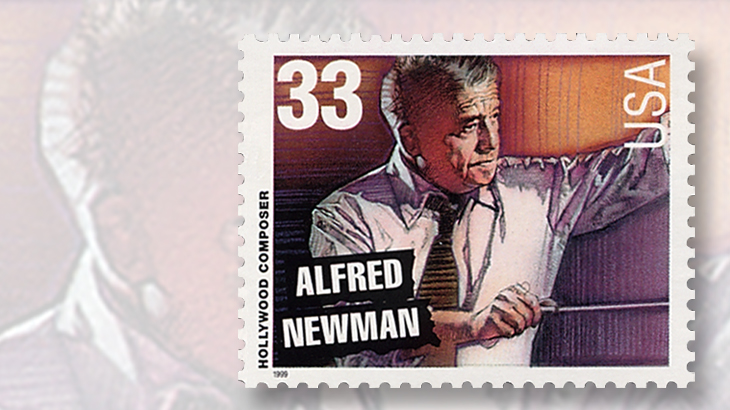 Film composer and conductor Alfred Newman, on a 33¢ stamp from 1999 in the Legends of American Music series.

Oscar-winning composer and conductor Alfred Newman was born March 17, 1901, in New Haven, Conn., the eldest of 10 children in a financially struggling family. He learned to play piano, and after the family moved to New York City he found work performing in theaters at age 13 to bring in income.

Newman traveled the vaudeville circuit and became a prominent Broadway musician and musical director. Forging friendships with other composers of the day, he traveled to Hollywood in 1930 following an invitation from Irving Berlin.

Newman also pioneered a technique of synchronizing music to film known as the Newman system.

Alfred’s brothers Emil and Lionel were also well-known film composers, as are his sons David and Thomas, and nephew Randy Newman (the son of another of Alfred’s brothers, Irving).

Alfred Newman was named music director for 20th Century Fox in 1940. His final film score was for the 1970 drama Airport.

A 33¢ stamp honoring Alfred Newman was issued Sept. 16, 1999, in the Hollywood Composers set of the Legends of American Music series (Scott 3343).