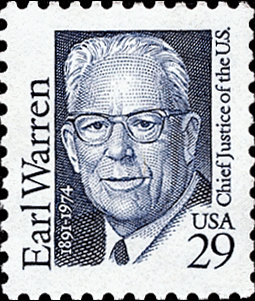 Chief Justice Earl Warren was born March 19, 1891. In 1992 he was honored on a 29¢ stamp in the Great Americans definitive series.

Though known for his many years of service as chief justice of the United States, Earl Warren was also a longtime district attorney, attorney general for California, and governor.

He was born in Los Angeles on March 19, 1891. After studying law at the University of California, Berkeley, Warren worked briefly for a law firm before enlisting in the Army during World War I.

By 1938 he was California's attorney general, and in 1942 he won his first term as governor.

Warren was the Republican Party nominee for vice president, running with Thomas Dewey, in the 1948 election won by Harry S. Truman.

Appointed chief justice by President Dwight Eisenhower in 1953, Warren led the court in the landmark decision that ended school segregation. He also headed the commission bearing his name that investigated the 1963 assassination of President John F. Kennedy and the killing two days later of the arrested suspect, Lee Harvey Oswald.