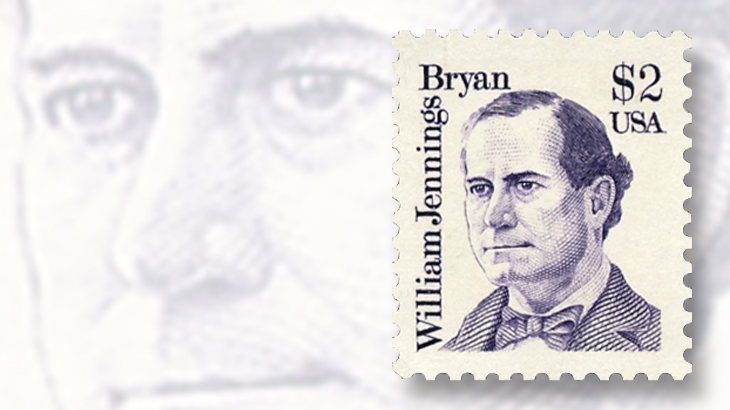 Politician and orator William Jennings Bryan was honored on a $2 definitive stamp issued on his March 19 birthday in 1986.

Bryan graduated from Illinois College in 1881 and studied law in Chicago before moving to Lincoln, Neb. He married Mary Elizabeth Baird in 1884, and together they had three children.

Bryan was elected to the House of Representatives in 1890 and won re-election two years later. His defense of farmers and working men struggling against more powerful business interests earned him a populist following and the Democratic nomination for president in 1896. He lost the election to William McKinley, and served his country instead as a colonel during the Spanish American War, leading the Third Nebraska Volunteer Regiment.

He was nominated as the Democratic presidential candidate two more times, in 1900 and 1908, but despite never winning the nation's highest office, he remained a popular public figure. He was named Secretary of State in 1913 by President Woodrow Wilson, but resigned after two years in a disagreement with Wilson on foreign policy.

In 1925, Bryan was an important figure in the famed Scopes “monkey trial” considering whether teaching evolution in a public school was illegal. Bryan, devoutly religious throughout his life, promoted the anti-evolution stance that won the trial, but the conviction was quickly overturned in a higher court.

Bryan died less than a week after the trial ended, and is buried at Arlington National Cemetery.