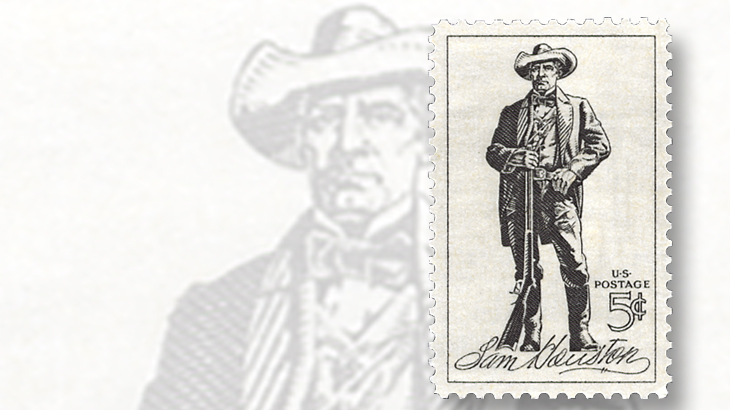 An icon of Texas history, Sam Houston was born March 2, 1793, in Rockbridge County, near Lexington, Va. After his father died in 1907, the family moved to Eastern Tennessee, but Houston left home some two years later to live among the Cherokee Indians.

At age 20, Houston joined the United States Army during the War of 1812 and served under Gen. Andrew Jackson. He returned to Tennessee in 1818 and studied law, leading to his election that year as attorney general in Nashville.

By 1823 Houston was serving in the U.S. House of Representatives and was elected governor of Tennessee. He resigned his office and traveled to live with the Cherokee in the Indian Territory in present-day Oklahoma, where he became a tribal representative.

In 1832, Houston left for Texas, then part of Mexico. He was chosen to command the Texian army and fought for independence against the forces of Mexican leader Antonia Lopez de Santa Anna, defeating them at San Jacinto.

Houston was twice elected president of the independent Republic of Texas. When Texas joined the Union in 1845, Houston was elected senator, and would later serve as governor. As the Civil War loomed, he opposed secession and was removed from office by the Texas secession convention.

Houston died at age 70 in 1863, having served as governor of two different states.

In 1936, the centennial of Texas independence was commemorated on a 3¢ stamp that included a portrait of Sam Houston (Scott 776).