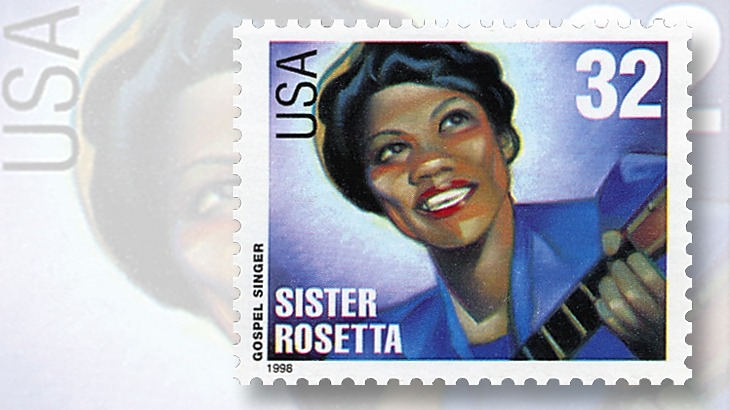 Sister Rosetta Tharpe is commemorated on a 32¢ stamp in the 1998 Gospel Singers set.

The woman known as “the godmother of rock ’n’ roll,” Sister Rosetta Tharpe, was born Rosetta Nubin on March 20, 1915, in Cotton Plant, Ark.

With her mother, Katie Bell Nubin, Rosetta traveled the South as a child, playing guitar with astonishing skill and singing gospel music. After they moved to Chicago, Rosetta sang at the Church of God in Christ, but she moved to New York City in 1938 after her first marriage ended. Taking the name Rosetta Tharpe, she performed for a while in clubs and theaters, and signed with Decca Records.

Her music blended gospel music with overtones of blues and jazz, influenced by top performers such as Duke Ellington. Her early Decca recordings, including Rock Me and The Lonesome Road, further expanded her audience into the secular world. Accompanied by piano, bass, and drums, Strange Things Happening Every Day became a hit for Tharpe in 1945.

Tharpe accompanied her spirited vocals with her own distinctive finger-picked lead guitar in a rocking style that would influence many of the early rock ’n’ roll pioneers. Though she recorded some secular music, she remained dedicated to her gospel roots throughout her career.

Sister Rosetta Tharpe is honored on 32¢ stamp issued July 15, 1998, in the Gospel Singers set of the Legends of American Music series (Scott 3219).